After some years of planning Slow Food Anglia will finally be working a project later in 2019 to establish a community food centre and Slow Food base in Norfolk, this will be in cooperation with a similar Slow Food project in Dartford in Kent and both these projects will be overseen by Slow Food UK.
The new centre will be situated in Kings Lynn and include offices, an industrial kitchen, class rooms and learning space for demonstrations and events, we will also be working closely with the local council and local schools.
In a world where consumers realise more and more the importance of good healthy food produced in a sustainable way we believe that having a centre which can offer courses and talks about growing, preparing and cooking healthy food will be a huge asset to the community in Kings Lynn.
We will also be working closely with members of Slow Food groups in the UK, northern Europe and the Mediterranean region to offer tours and courses to our members and to interested local bodies and consumers.
Several schools in Italy are very interested in finding out more about the diet and types of produce on offer in the UK, they will be connected through our Slow Food network to similar schools in east Anglia who wish to work with them and to develop close connections for the future. Already one of the Italian schools interacts with other schools solely by the means of the internet using Skype and other forms of on line communication to hold joint lessons and classes without having to physically visit the other schools site. 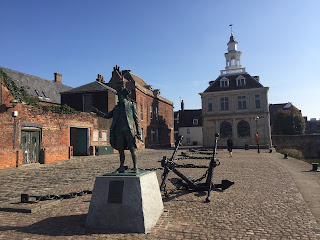 As part of this exciting project we will work with Sail cargo members who currently move sustainable and ethically produced food and drink between several countries and regions, and Slow Food Anglia are currently involved in plans to ship small amounts of cargo around the north sea coast in the UK but together with interested groups from the Mediterranean.
We will work closely with Sail cargo members so we can use their produce at the new Slow Food centre in Kings Lynn where possible, this will normally depend on the availability of the ship and the type of produce it is transporting on its voyage
Currently one group of the Sail cargo alliance moves cargos of olive oil and salt from Portugal to the UK, another group moves cargos across the Atlantic, which are typically rum and wine.
Slow Food Anglia with the assistance of Slow Food UK plan to be working with Sail cargo members to set up a dedicated route from Mediterranean and Holland in 2020 bringing cargo to the East Anglian coast which will include the ancient port of Kings Lynn, and a proportion of the cargo will include produce from Slow Food members from across the UK and also small artisan producers in our region.
All these projects will entail Slow Food Anglia working more closely with other non UK Slow Food groups across Europe and we are very pleased with the response we have had from our fellow Slow Food members and groups abroad.