Slow Food Anglia held one of their regular social evenings, this time in the city of Cambridge on Thursday 5th April at the popular Thirsty bar and beer shop near the city centre.
Members of Slow Food Anglia were there with invited guests to prepare plans for a new Slow Food group in Cambridge and the evening proved a great success with many new volunteers coming forward to help set up the new group in the next couple of months.
The evening started at 6 and talks about the Slow Food organisation in England and East Anglia began at 7, they were given by Mark Matless who is in charge of the Ark of Taste project across the UK and Dermott Sales, the leader of Slow Food Anglia.
Mark spoke about the Ark of Taste project and how they are working with many small producers to promote their fantastic range of produce in East Anglia and other parts of England. We are also about to start work on obtaining another Presidia for a rare and endangered food, this will be only the sixth that will have been granted in England. 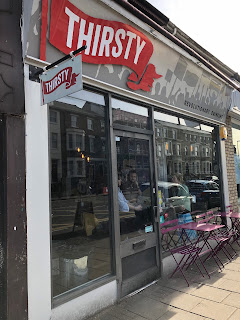 We hope to be able to establish the new Slow Food group in Cambridge in the next couple of months and then hold a small food festival and Sagra meal with both the new members and interested members of the public in the early Autumn. The meal will be based on the Italian Sagra where everyone sits together and the food is served to all at the same time, where we have held these before in Norwich and north Norfolk they have proved extremely popular.
So we are now going to look for a suitable venue in Cambridge where we can hold the autumn event and the Sagra meal for around 80 guests and we are sure that the new volunteers and members we have in Cambridge will work with us to make the new group in that city a success.
There will be further updates in our monthly newsletter and also in our blog and we thank everyone who came to Thirsty in Cambridge last Thursday evening for making it such a memorable and interesting event. 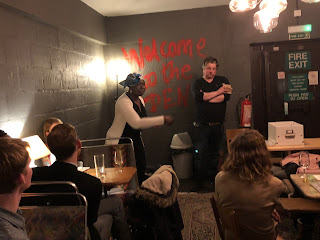