Slow Food Anglia together with Slow Food Norwich held a special event to promote East Anglian and Italian produce made by Slow Food producers and supporters on Terra Madre day Sunday 10th of December.
We were pleased to be able to hold this annual event at Louis Deli in Upper St Giles in the City of Norwich which is run by Graham one of our Slow Food commitee members and long time supporter of Slow Food in both Norwich and East Anglia.
Before the event several members had visited Fen farm diary in Bungay who had very kindly donated several of their Baron Bigod cheeses and raw milk butters, they are Slow food Approved members and also came to our event at Holkham Hall last April.
Slow Food Anglia were also were given several extra virgin olive oils to taste at the event by Olivaverde, another long time supporter of Slow Food in Anglia and also Slow Food London, and all these fine extra virgin olive oils are produced by Slow food members in Italy. 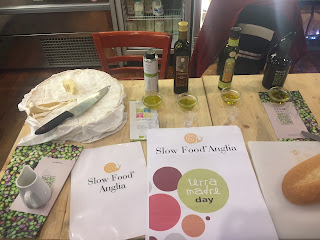 We also had Mark Matless from Bullitt catering set up one of his fantastic BBQ street food stands in the street outside the Deli. Mark cooked a special type of beef and offered it to both our members and friends inside and to the public outside in Upper St Giles Street.
The artisan produced extra virgin olive oils were from Italy and Greece, with three olive oils from Italy from the Italian regions of Marche and Puglia and one from Sicily, and the olive oils from Puglia and Sicily were from this years harvest.
The olive oil from Greece is made by two brothers, new to oil production who had inherited disused land and olive trees from their family and decided to start making olive oil again produced by olives typical of their region near Corinth. 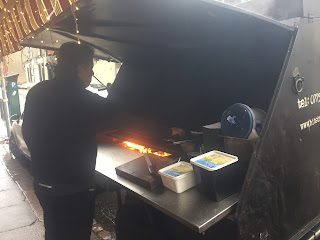