Slow Food Anglia are very pleased to be holding their first Sagra at the historic Holkham Hall Estate, home of the Coke family and the Earls of Leicester located on the beautiful North Norfolk coast.
We will be holding the Sagra at Holkham Hall along with the well known Norfolk based Bullitt Dining who are our partners for this prestigious and exciting event on Saturday 8th April 2017 in the newly refurbished Lady Elizabeth Wing on the estate.
A Sagra is an Italian food festival, normally dedicated to a specific local food, often specific to that village, town or particular area of an Italian region, and it normally will be a celebration of a specific food such as olive oil, meat, fish, pasta and other local produce.
During the Saturday there will be twenty six local East Anglian food producers present inside the venue with another ten local street food vendors from Norfolk and Suffolk located outside in the courtyard.
We have held similar events both in the UK and Italy over the past five years and photos of the very popular Sagra we held in Norwich last August and other Slow Food events are on our Flickr Pages 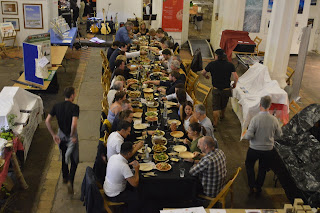 As part of the larger international Slow Food movement Slow Food Anglia supports the enjoyment and protection of locally produced foods, regional cooking and the local environment in East Anglia, as well as promoting excellent local artisan food producers across the region.
One of the aims of the Sagra is to promote and support less well known producers, meats, cheeses, bread, vegetables and other excellent produce of the region, and we will also be showcase rare native oysters from Colchester for which Slow Food Anglia has just obtained Presidia status, this being only the fourth Presidia to be granted in the UK.
Our last dedicated food festival last August in Norwich proved extremely popular and we believe that by holding our next festival at Holkham Hall estate we will help make Slow Food Anglia, our work and ethos increasingly well known in not just Norfolk but across the east of England. 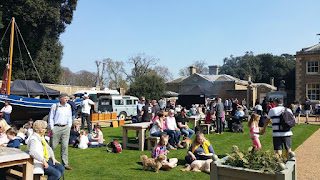 Holkham has been at the centre of life in north west Norfolk since the foundation and building of the beautiful and imposing main hall, adjacent buildings and surrounding estate land and still today is still a superb setting where people come to visit and enjoy from all across the world.
The Coke family has lived at Holkham in north Norfolk since 1609, when the founder of the family fortune, Sir Edward Coke, purchased the manor of Neals.
Thomas Coke lived here with his parents, until their death in 1707, in the Elizabethan manor house known as Hill Hall. However, after returning from his Grand Tour, Thomas employed the architect Matthew Brettingham to oversee the work of interpreting and implementing the designs for the new house drawn up by Kent and himself.

In 1734, the first foundations were dug, and 30 years later the house was completed. Thomas died in 1759 and never saw his great dream fulfilled and the task of finishing and furnishing the house fell to his widow Lady Margaret Tufton. The house today is little altered from the first Earl’s original ideal. During the 1850s, the second Earl installed central heating at great expense and added the vestibule on the north side of the house, the stables, offices, orangery and buildings to the east and the terraced gardens to the south. It was the seventh Earl of Leicester who worked to reverse the more unsympathetic changes of his ancestors, notably by reinstating the correct 18th century glazing to the windows and returning the state rooms as far as possible to their original appearance.