Slow Food Anglia are very pleased to be holding an event in Norwich to celebrate the annual Terre Madre day in Norwich on Sunday December 10th. Terra Madre day is held each year in December and all Slow Food groups across the globe try to hold events to mark the anniversary of our foundation as an organisation in 1986.
The event will be held at Louis' Deli in Upper St Giles Street in Norwich from 11.30 until 4.30 on the Sunday and the Deli is one of our Slow Food Anglia Approved scheme business members and has been a supporter of both Slow Food Anglia and Slow Food Norwich for many years.
On the day there will be members of Slow Food Anglia and Norwich at Louis Deli and there will be information about the Slow Food movement and members will be holding workshops on local East Anglian cheeses and Italian extra virgin olive oils, these are all produced by Slow Food members in the UK and in Italy.

Mark Matless one of our Slow Food Anglia chef alliance members will be preparing the food which will be available to the public on the day, this will include a special cut of Sirloin aged for 52days of Galician beef. Mark whose street food business Bullitt Guerilla dining is well known in Norwich and across Norfolk will also be giving talks about the food he is presenting at Louis' Deli, his personal ethos as regards good sustainable food and also on the Slow Food chef alliance association.
There will be a tasting of several local East Anglian cheeses which will include the fantastic Baron Bigod brie from Fen farm dairy near Bungay in Suffolk which is also one of our Slow Food Anglia business members.
Olivaverde the local specialist olive oil company will have four artisan produced extra virgin olive oils which will be tasted during the afternoon, the oils will be from Italy and Greece, there will be three olive oils from Italy, these will be from the Italian regions of Marche and Puglia and one from Sicily, the oils from Puglia and Sicily will be from this years harvest and will have been bottled less than a month ago, the 2016 Greek olive oil will be from near Corinth. 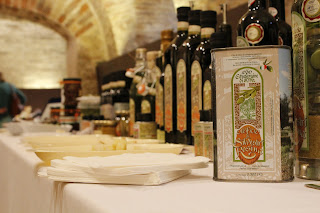